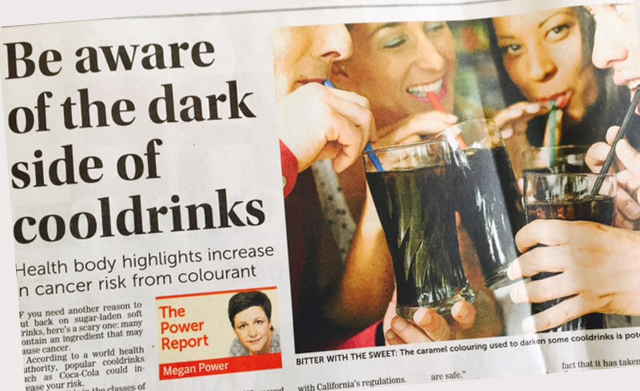 If you need another reason to cut back on sugar-laden soft drinks, here’s a scary one: many contain an ingredient that may cause cancer.

Soft drink consumers are being exposed to an avoidable, unnecessary cancer risk. Food activist and researcher, Sonia Mountford has been waiting since January 2013 for a commitment by Coca Cola South Africa to align their use of the carcinogenic substance 4-MEI to that of the United States. Megan Power managed to get a timeline from them.

According to a world health authority, popular cooldrinks such as Coca-Cola could increase your risk.

The culprit is in the classes of the caramel colouring used to make some dark-coloured cooldrinks their distinctive brown hue. More specifically, it’s the chemical compound known as 4-methylimidazole, or 4-MEI – a byproduct of the caramel manufacturing process – that is to blame.

The 4-MEI compound can be in the caramel colouring used in a variety of foods, from bread to beer, dark sauces – such as soy and barbecue – pancake syrup and soups.

It also occurs naturally when coffee beans, meat, or other foods are roasted or processed.

However, experts believe that people are mainly exposed to the colouring through cooldrinks.

And it’s not only the International Agency for Research on Cancer, part of the World Health Organisation, that has concerns.

In California, 4-MEI is on the state’s list of toxic substances, and products sold there that expose consumers to more than 29 micrograms of 4-MEI a day have to carry a cancer warning.

Effectively, in 2012 California banned 4-MEI in any amount that could potentially lead to one cancer case among 100000 people.
Although the industry denounced the findings as being based on bad science, Coca-Cola (and Pepsi) in the US moved swiftly to get their suppliers to reduce the 4-MEI in their caramel colourants to avoid its product having to carry the dire warning.
Coke claims that the doses of 4-MEI that caused cancer in mice were unrealistically high and that in low doses, there is no health risk. This view is supported by several other health authorities, including the US’s Food and Drug Administration and the European Food Safety Authority.

Which probably explains why Coke has been slow to roll out the reduced-4-MEI formula in areas and countries where it’s not under legal pressure to do so, including South Africa.

But not for long. Coke’s roll out of the reduced 4-MEI recipe is under way and will be complete by the end of September.

Unfortunately, despite weeks of back and forth with Coca-Cola South Africa, that’s as much as I could get. The company declined to divulge specifics on 4-MEI levels at the moment, new roll-out levels, or even the percentage reduction, citing company confidentiality.

It was also not in a position to elaborate on which brands already contained the reduced recipe, in what volumes and in what areas of the country.

The beverage manufacturer is adamant that, regardless of current levels in its drinks, 4-MEI poses no threat.

“The science does not support [California’s] position, and there is no public health risk that justifies the requirement of a warning,” said Coke SA’s head of communications, Zipporah Maubane. “We want to assure everyone that all of our products – whether they have the reduced-4-MEI caramel or not – are safe.”

When first approached, Coke SA sent me a six-line statement saying the company was committed to product safety and had rolled out the reduced recipe in South Africa. However, when I requested more details, it revealed that the changeover had started only in April, with no set time frame for completion.

It was only after objecting to Coke’s noncommittal response that the September completion date was eventually given.
It’s an answer Cape Town food activist Sonia Mountford has been waiting for since January 2013, when she first asked Coke SA the question.

Coke responded to her saying there was no risk from 4-MEI. When she persisted, Coke said a timeline to roll out the new recipe was “still being developed”. A year later, Mountford queried progress. She never got a response.

“My biggest issue is the lack of transparency around the change,” said Mountford this week.
“Was Coke hoping to quietly make these changes while no one was looking, hoping not to draw further attention to the fact that it has taken them more than two years to bring the SA product in line with the US?”
Mountford is even more concerned about Coke being handed out free to kids at national sporting events.

“The fact is that even small amounts of 4-MEI can pose great risk to our health since we are already overwhelmed by carcinogenic substances throughout the day,” said Mountford. “At least, let’s protect our children.”

An assistant professor at the Johns Hopkins Bloomberg School of Public Health in the US, Keeve Nachman, would agree.

“Soft drink consumers are being exposed to an avoidable and unnecessary cancer risk from an ingredient that is being added to these beverages simply for aesthetic purposes,” said Nachman, the senior author of a study, published in February, that analysed national cooldrink consumption in the US.

He reported that up to 58% of people over the age of six typically had at least one can of soft drink a day.

In another set of published results, in 2012, a US consumer watchdog group, the Center for Science in the Public Interest, looked at levels of 4-MEI in Coke samples in nine countries. They ranged from four to 267 micrograms of 4-MEI per 355ml.

The highest levels were found in Brazil, with 267 micrograms, followed by Kenya with 177 micrograms. South African Coke was not sampled.
Note: although caramel colouring is used extensively in the food industry, not all of it contains 4-MEI.
E-mail: consumer@sundaytimes.co.za

2 thoughts on “Be Aware of the Dark Side of Cooldrinks”